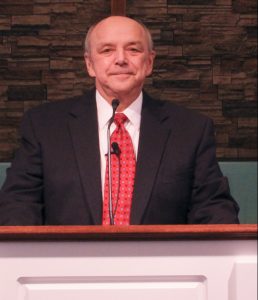 Pastor Arthur S. Gilmore was born the fifth son of Robert and Eva Gilmore, in Charleroi, Pennsylvania, a small town on the banks of the Monongahela River. Shortly after his birth his family moved just a few miles to Bentleyville, Pennsylvania, to be closer to the coal mine that his dad worked in. When Pastor Gilmore was 12 years old his dad was laid off from the coal mine and subsequently moved the family to a new community just north of Philadelphia where he found work at the United States Steel’s Fairless plant. Pastor Gilmore lived in the Levittown-Fairless Hills area for the next 21 years, graduating from Pennsbury High School and the Bucks County Technical School. He went on to attend Bucks County Community College where he majored in Accounting for three semesters. While attending college Pastor Gilmore met his future wife, Christine Crain and they were married on October 6, 1967. He went to work for the Southland Corporation Seven-Eleven Stores division for the next two years working his way up from clerk to store manager. After leaving Southland Corporation in 1969, he went to work for National Can Corporation as a factory laborer. After being there for a year he was able to take a 5000 hour apprenticeship as a press set- up and service technician, which he completed in a year and one half, and worked as a journeyman until August 1983. In August 1983, with the Lord’s leadership, Pastor Gilmore moved his family to Jacksonville, Florida, where he enrolled as a student at Trinity Baptist College. He completed a four-year Bachelor of Arts program in three years, graduating with highest honors and was elected to the Who’s Who of American Universities and Colleges. He was elected president of Theta Pi Rho men’s society for two consecutive years and was the vice president of his graduating class. Upon graduation in 1986 he went to work for Dr. Bob Gray as a teacher at Trinity Christian Academy.

In October of 1987 he accepted God’s call to pastor Parkdale Baptist Church in Gastonia, North Carolina. Pastor Gilmore learned much about the ministry at Parkdale Baptist as he gained hands on experience in a variety of ministries. There he headed up a bus ministry of four bus routes and one van route, Temple Christian School which used the A-BEKA curriculum in grades k4 – 12, a food room ministry and a teen ministry. Pastor Gilmore was also responsible for all of the maintenance on the vehicles, buildings, and grounds. In October of 1992 Pastor Gilmore accepted God’s call to First Baptist Church of Easton, Pennsylvania. He would find this to be a very unique and difficult situation as the former pastor of 17 years had been shot and killed in a random act of violence. The church attendance was about 45 on Sunday morning. The bus ministry had been shut down and the Christian School had been closed. Since his coming the Lord has blessed the ministry mightily. The Sunday morning attendance has more than doubled, there is a bus running every Sunday, and the building has been more than doubled in size with the addition of a 200+ seat auditorium, fellowship hall, nursery, kitchen and bathrooms. The church has ministries to three nursing homes, and a homeless shelter. God has truly blessed his faithfulness and steadfast desire to serve Him. Pastor Gilmore has continued his education by earning a Master’s degree from Trinity Baptist College and a Doctor’s degree from Andersonville Theological Seminary.

When Pastor Gilmore first met his wife he was a Roman Catholic. Chris, however, was a born again Christian and attended church and Sunday School every week. He began to attend church with her and made a profession of faith shortly thereafter and was baptized by immersion. For the next few years he feigned to be saved but on February 22, 1974, he acknowledged his lost condition and accepted Jesus Christ as His personal Saviour. He and Chris joined Faith Baptist Church in Fairless Hills, Pennsylvania, and spent the next nine years under the ministry of Dr. Paul Fedena and served in a variety of capacities. God has blessed the Gilmores with three children and seven grandchildren, and six great grandchildren. Their oldest son, Arthur, is married to the former Trisha Beamer and they have two sons, Kurt, and Bret. Art graduated from Bob Jones University, is currently employed as a computer programmer, and lives with his family in Chesapeake, Virginia. The Gilmore’s daughter, Angela, is married to Douglas Sass, and they reside in Jacksonville, Florida. They have three children, Autumn, Amber, and Andrew and six grandchildren, Kyson, Keller, Forrest, Ali, Audrey, and Atlas. Angela has trained to be a court stenographer and stays very busy in that field. John William is the youngest son of the Gilmores. He is married to the former Sandy Ray and they have two children, Kaitlyn and Billy. Bill graduated from Trinity Baptist College with a Master’s degree and from Andersonville Theological Seminary with a Doctor’s degree. He has served as a pastor and as an assistant pastor and is currently working on staff at Oak Leaf Baptist Church in Jacksonville, Florida.

Pastor Gilmore’s vision for First Baptist Church is first and foremost, that it would continue to be a great lighthouse for the gospel in the Lehigh Valley rescuing the perishing in this area. Beyond that, he desires to see First Baptist Church remain one that stands firm on Bible doctrines, standards and separation. Pastor Gilmore does not subscribe to the contemporary movement found in many churches today but rather holds to a King James only Bible position and with the traditional teachings and practices of the old time Bible believing churches. His desire is to build a church that is strong in doctrine and convictions according to Scriptural truth and to help people have a closer walk with God. 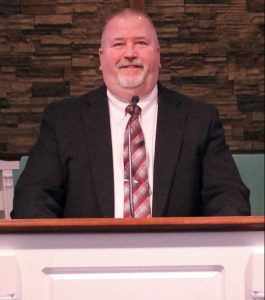 Pastor Bob Meyer was born and raised in Willoughby, OH. On the cradle roll at the First Baptist Church of Willowick, he was saved at age six and baptized at age eight. From 4th grade to graduation, he attended Mentor Christian School. Sometimes no matter how well a child is raised, even in the best of environments, they choose to rebel and backslide on God. It was ten years later, when he hit bottom and faced the prospect of divorce that he turned his life over to the will of God. God moved in a miraculous way and paved the way for the Meyers to move to Easton in 1993. He drove the van for the first “bus route” and started the Southside route a year later. Two nursing home ministries began in 1996. In 1997, Pastor Meyer began classes at the Northeast Baptist School of Theology and graduated from night school in May of 2003. He was ordained the same month by the membership of First Baptist Church of Easton. In 2018, he completed his M.Div from Liberty University online. Pastor Meyer leads the song services and teaches the Teen Class at First Baptist. He and Amy coordinate most church banquets and dinners. Amy also heads up the Nursery. The family includes Paul and his wife Abi (currently serving the Lord in NJ), Conor (currently residing in glory), Caity, Gretchen, Aidan, & Abby.
Mrs. Chris Gilmore, Chuch Secretary 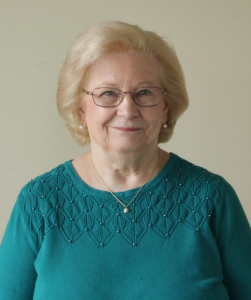 I am the daughter of Donald S. and Mary L. Crain and have five brothers and sisters. I was raised in a Christian home in Altoona, PA. At the age of nine years old we had a revival meeting at our church. Through the week the Holy Spirit spoke to my heart and after running away from the Lord all week long, I finally on Friday night received Jesus as my Savior. I thank God I was saved that night and for Christian parents and grandparents that prayed for me. I feel privileged to be the wife of a man called of God.

I’ve taught Sunday school for many years. Been the driver for the ladies for Soul winning on Thursday or when ever we go. I pray God will continue to us me in the winning of souls. I’ve done nursery on Wednesday night for many years. I sit with ladies in hospital waiting rooms and etc. I’ve been my husband’s secretary for over 23 years. I have many duties under the heading of church secretary and feel privileged to be there.

I’ve supported my husband fully in whatever God calls him to do.